Deprecated: Methods with the same name as their class will not be constructors in a future version of PHP; sl_disclosure_widget has a deprecated constructor in /home/dkoboldt/public_html/massgenomics/wp-content/plugins/skimlinks/widget.php on line 3
 Sanger Adds Two Cancer Genomes

This week in Nature, investigators from Wellcome Trust Sanger Institute published the fourth and fifth complete cancer genomes. Interestingly, both are cancers in which the primary mutagen is known: malignant melanoma (UV light) and small-cell lung cancer (tobacco smoke).  This seems to be important, because when I looked at the number of validated somatic coding mutations in each of the first five genomes, the latest two stood out. 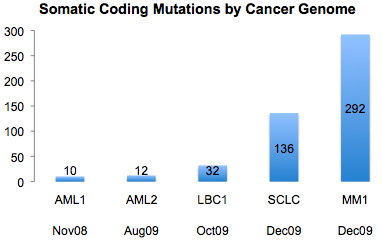 Granted, small-cell lung cancer and malignant melanoma differ in many ways from leukemia and breast cancer. Yet the increase of confirmed somatic coding variants in these two recent studies is striking.

Corregendum: Not the First Catalogue of Somatic Mutations

Even so, the authors’ claim that they are “providing the first comprehensive catalogue of somatic mutations from an individual cancer” seems unjustified. Perhaps this is based on the idea that AML1 and LBC1 focused on coding variants only. Yet I point out that in AML2 we evaluated 282 noncoding somatic mutations and confirmed over 50. In the melanoma study, only 470 of the 33,345 newly found somatic mutations were sent through validation, and the method for selecting these was not made clear. At best, the “first comprehensive” claim is a semantic one; at worst, it’s just wrong.

That said, these are still landmark studies. Even with the emergence of next-generation sequencing, completing a cancer genome is a marvelous achievement. It requires substantial financial resources and technical expertise; we certainly knew that WTSI had these. But guiding the data through analysis and forming a cohesive story out of it is the real challenge. It requires persistence, intellect, and scientific rigor, but most of all it requires strong leadership. I congratulate our friends across the pond for showing that they have what it takes.

The melanoma study, like the first three cancer genomes, applied high-throughput sequencing on the Illumina platform (2 x 75bp, in this case). In contrast, the SCLC study is the first cancer genome to be sequenced on a different platform – ABI SOLiD. While the read lengths for SOLiD were not impressive (2×25 bp), the specificity was – 77 of 79 (97%) of somatic coding SNVs and 333 of 354 (94%) randomly chosen genome-wide variants tested confirmed by PCR and traditional sequencing.

Unfortunately, SOLiD also comes with a sensitivity cost. Only 22 of 29 previously identified SNVs (77%) were called. Indels were a real problem – neither of the two previously known coding indels were detected, and the validation rate for predicted somatic indels was 25%.

Intriguingly, in both studies the authors identified distinct mutational signatures of exposure to the long-suspected environmental risk factor – ultraviolet radiation (in malignant skin cancer) and tobacco smoke’s “cocktail of carcinogens” (in lung cancer). The substantial number of mutations in each genome made it possible to characterize these signatures with unprecedented statistical power.

The strength of both studies is the insight into the molecular mechanisms of DNA damage, repair, and mutation that could be inferred from such a powerful dataset. In melanoma, the most prevalent mutations were C->T and G->A transitions; the mutational spectrum and sequence context indicate that most of these are attributable to ultraviolet-light-induced DNA damage. In lung cancer, G->T transversions were the commonest substitution; these mutations have previously been linked to polycyclic aromatic hydrocarbons and acrolein in tobacco smoke.

Cancer, like many common, complex diseases, has many risk factors that come from the environment as well as from one’s DNA. Here, for perhaps the first time, we get a picture of the significant mutational burden associated with two lifestyle choices.  Smoking is an obvious one – avoiding it dramatically decreases one’s risk of cancer and a host of other diseases. Now science can offer another definitive piece of advice. Everybody’s free, as Baz Luhrmann puts it, to wear sunscreen.