Deprecated: Methods with the same name as their class will not be constructors in a future version of PHP; sl_disclosure_widget has a deprecated constructor in /home/dkoboldt/public_html/massgenomics/wp-content/plugins/skimlinks/widget.php on line 3
 Return of Results: Genetics Experts Weigh In 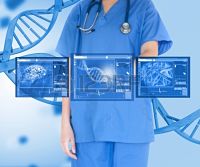 In my last post, I wrote about the return of results from next-gen sequencing, specifically a recent paper in AJHG about secondary findings in ~6500 ESP exomes. Today we’ll delve into another paper in the same issue on the attitudes of genetics professionals on return of incidental findings from whole genome sequencing (WGS) and exome sequencing (ES).

Joon-Ho Yu and colleagues conducted a survey of around 850 genetics professionals to gauge their attitudes toward:

To identify potential respondents, the authors first collected e-mail addresses, professional degrees, and states of residence from three societies: the American Society of Human Genetics (ASHG), the American College of Medical Genetics (ACMG), and the National Society of Genetic Counselors (NSGC). They sent out 9,857 invitation e-mails and had 847 respondents, for a completion rate of around 8%.

The majority of those respondents were:

Responses to the heady questions from the survey are depicted in Figure 1, which I’ve adapted here:

Overall, genetics experts were very supportive of the idea that some secondary findings should be returned from clinical ES/WGS. The majority of respondents agreed that incidental results should be offered to:

Where the Experts Agree

Nearly all experts (88%) supported offering results about childhood-onset conditions to the parents of child patients, and most (62%) would also offer information about the child’s results for adult-onset conditions. The last result in the figure above is an important one: the vast majority of experts (81%) agree that the preferences of a patient or family should guide which results are offered for return. And most (66%) agreed that a web-based tool would suffice to assess those preferences.

Where the Experts Don’t Agree

The experts were divided (~40% agreed/disagreed) on whether only actionable secondary results should be returned, and less than half (44%) thought that giving patients and families the option to choose which results to receive would improve care. Respondents also differed in their opinions on what kind of results to return. 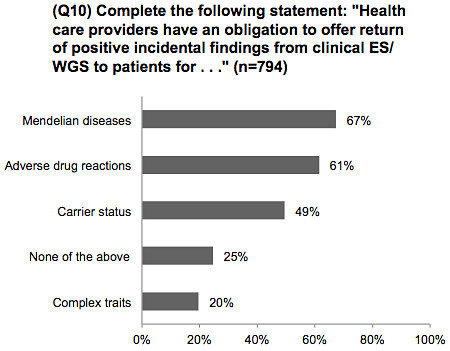 When asked about the type(s) of conditions that merited return of positive incidental findings, the experts chose:

And about 25% responded that healthcare providers had no obligation to return secondary results.

How to Return Results

Winning the survey’s least-surprising category was the part where respondents were asked to rank, by order of preference, the manner in which incidental findings should be communicated.

Recently, the ACMG published their recommended list of 57 genes/conditions for which incidental findings should be returned. Their recommendations got a lot of press, and received a vigorous (and mixed) response from the medical and research community. In this survey, 68% of genetics professionals agreed that results from the ACMG list should be reported, regardless of the indication for sequencing.

However, only 29% felt it was the responsibility of the health care professional to decide which results on the minimal list should be returned. And the majority of respondents (70%) disagreed with the notion of returning secondary findings from the ACMG list regardless of the patient/family preferences for getting that information.

Next, the genetics professionals were asked for their perspective on the greatest challenge of returning results from clinical ES/WGS. 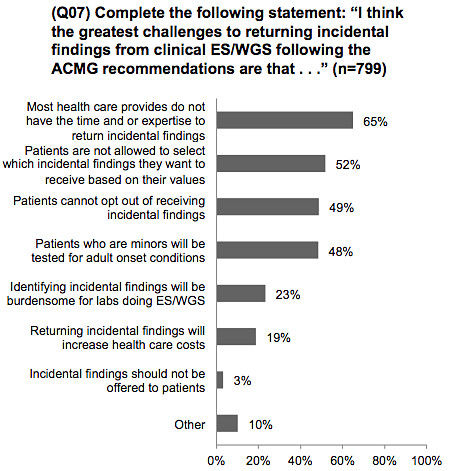 The greatest concern is one that I’ve heard before, particularly in the roundtable discussion on genetic testing last year: health care providers simply don’t have the time and may not have the expertise to return incidental findings. There are also concerns about the effect of returning secondary findings on the patients and families:

The foremost concern by a long margin was the anxiety and stress that this knowledge might cause the patient. That’s why asking and honoring the patient/family preferences beforehand (i.e. before the sequencing even happens) is so important. There are privacy concerns as well; about a third of respondents worried that recipients of secondary findings might experience discrimination.

Clearly, the decisions about whether to return results, which results to return, and how to do so will be difficult to address. It’s also unclear, at least to me, which group or organization or (dare I say) government body should call the shots. We’ve heard from the genetics professionals, but it’s also important to hear from two other groups: primary care physicians and the general public (i.e. patients and families). These people arguably have the most at stake, so their opinions should carry significant weight.

We should move quickly to collect the information necessary for well-guided decision making, because one thing is clear: Next-gen sequencing will soon be a routine part of clinical care, whether we like it or not.