Deprecated: Methods with the same name as their class will not be constructors in a future version of PHP; sl_disclosure_widget has a deprecated constructor in /home/dkoboldt/public_html/massgenomics/wp-content/plugins/skimlinks/widget.php on line 3
 Genomics Bloggers Meet at AGBT

One of my favorite parts of AGBT was the blogger’s luncheon, in which four of us from the genomics blogging community got together to talk shop.  We had Daniel MacArthur of Genetic Future, Anthony Fejes of Fejes.ca, David Dooling of PolITigenomics, and me, Dan Koboldt of MassGenomics. 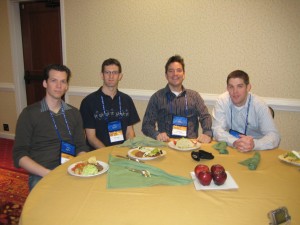 It was an impromptu but very enjoyable meeting where I learned that I’m probably the least serious about all of this blogging. We all agreed that Daniel MacArthur is the most prolific among us, and as I found out in the course of AGBT, he’s probably the most well known as well.  He and David Dooling had an intimate knowledge of their blog statistics and readership.  I have much to learn in that vein.

Anthony Fejes of the self-titled Fejes.ca began his efforts not to blog about genomics, but actually photography, a keen interest of his.  David Dooling, of course, covers three areas that gave the title to his blog: Politics, IT, Genomics.

All friendly competitions aside, I was intrigued to learn that we all face similar challenges.  Perhaps foremost among them is knowing just how much or how little to say about the work that we’re doing.  We are all scientists, of course, and thus keen to share knowledge with others.  Yet we do work in a competitive field, one in which there are never as many grants as grantees, never as many publications as submitted manuscripts.

Fortunately, at our little roundtable, there were no adversaries for the NIH budget – Dooling and I work together, Fejes is in Canada, and MacArthur is on the other side of the Atlantic.  For that reason, perhaps, we could talk openly, learn from one another, and finally, put a face to the names we already knew so well.