Deprecated: Methods with the same name as their class will not be constructors in a future version of PHP; sl_disclosure_widget has a deprecated constructor in /home/dkoboldt/public_html/massgenomics/wp-content/plugins/skimlinks/widget.php on line 3
 AGBT 2012 Day 2: Cancer, Technology, and Oxford Nanopore 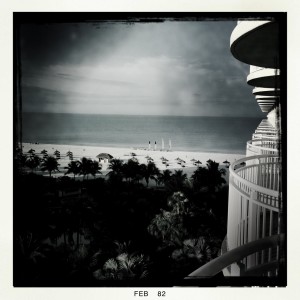 It was a thrilling day on Marco Island, with many good talks and the so-called “big announcement.” I feel as though I can’t remember much that happened before 11:55 a.m. local time, but luckily, I take notes.

Keynote speaker Rick Myers gave a high-level talk on the genetics and epigenetics of human gene regulation. They’re using CHiP-Seq to study the “interactome” of proteins binding to DNA. “Alignment to the genome and calling the gene models,” Myers said, “is still the hardest part.” He went on to talk about some of the other techniques they’re using: transposon-hopping RNA-seq (Tn-RNA-Seq), which sounds intriguing, and reduced representation bisulfite sequencing. These, with CHiP-Seq, bring together the interactome, the methylome, and the transcriptome.

Tom Gingeras spoke about the complexities of transcription in the human genome. He noted that 80% of the genome is expressed in the form of a primary transcript, including 90.7% of exon bases, 79.3% of intron bases, and 35.5% of intergenic bases. In his lab, they see a huge number of unannotated, single-exon transcripts that are intergenic, predominantly polyA-minus, and antisense. One very interesting thing they’re doing is looking at differences in transcription in different subcompartments of the cell.

Exome In A Day on the PGM. Kind of.

Joseph Boland of NCI gave a much-anticipated talk on exome sequencing with the IonTorrent PGM, a platform they’ve been working with for just over a year. It was ambitiously (and somewhat inaccurately) entitled “Exome In A Day.” They currently have six instruments, and have worked over the last year with the 314, 316, and 318 chips. Admittedly, the quick turnaround of the IonTorrent PGM has tremendous appeal for their laboratory, for situations such as:

In fairness, the hybridization for current exome kits takes 3 days, and sample/library prep takes another day. So even with 4-6 hours of sequencing, “Exome in a day” is not quite accurate. But it’s certainly faster than 8-10 day runs on the Illumina, albeit with dramatically lower throughput.

The presenter described some standard testing of the platforms on a CEPH trio, with comparisons to whole-genome sequence data from Complete Genomics. Coverage of target regions and variant calling stats looked pretty good, with perhaps a slightly higher false positive rate in the PGM data. Next, they sequenced the proband of a melanoma-prone family. Here, whole-genome data from CGI detected 16 cancer-relevant mutations, whereas the PGM exome data yielded only 10. This is a bit of a sensitivity concern, likely suggesting that important regions of the exome were under-covered.

There appeared to be a strong showing of cancer talks on the evening agenda, and indeed some of these were impressive. David Smith of the Mayo Clinic presented some early analyses of a project looking at head and neck cancer. The well-known risk factors for these deadly cancers (50% 5-year survival for advanced disease) are smoking and alcohol use. Recently, however, infection with two HPV serotypes (16 and 18) has been recognized as a risk factor, particularly for younger patients. As many as 90% of non-smokers who present with squamous cell carcinoma are HPV-positive. The numbers in the current study are still rather small: 8 exome tumor-normal pairs, 24 methylome (Infinium) pairs, and 18 RNA-seq pairs. Strangely, mutation rates in HPV-negative smokers and HPV-positive never-smokers seemed similar, which is puzzling, but could be an artifact of small sample numbers.

Sam Levy gave a nice talk on de novo assembly followed by assembly-to-assembly mapping (amusingly abbreviated DAAM) for the detection of somatic mutations, particularly indels and complex events. This seemed quite promising, and the presenter’s casual use of the acronym (“The DAAM approach calls them as somatic mutations.”) kept it light. Compared to a mapping-based approach for indel detection (BWA+GATK), their method seems to do better at finding longer indels. One disadvantage, though, is that the de novo assembly generally requires some planning, in the form of multiple libraries of different insert sizes.

The Aftermath of Oxford Nanopore

The talk throughout the afternoon, unsurprisingly, centered upon the announcement of a USB-drive-sized nanopore sequencer to be released in 2012 by Oxford Nanopore. I give them credit for keeping this effectively “under wraps” prior to Clive Brown’s talk, which drummed up the appropriate surprise and excitement in the meeting. Precious few were aware of the plans for the pocket-sized sequencer; one of them was Keith Robison who’d gotten a heads-up last night and had a post ready on Omics Omics! Sadly, Massgenomics was not offered an exclusive. Possibly because the author was here at Marco Island, actively blogging/tweeting, and admittedly might not have been able to contain such a whopper of a secret.

As much as I’m impressed by the technological achievement, I find myself bearish on the market-shifting potential of this technology. It seems like large genome centers are unlikely to have a use for disposable sequencers, and might lean more toward the larger instrument. It’s the same technology, and they still have kinks to work out. Time will tell how much of a disruptive technology this turns out to be.