Deprecated: Methods with the same name as their class will not be constructors in a future version of PHP; sl_disclosure_widget has a deprecated constructor in /home/dkoboldt/public_html/massgenomics/wp-content/plugins/skimlinks/widget.php on line 3
 Three studies highlight role of alternative complement pathway in AMD

Three letters to Nature Genetics published (online) this week report the association of a rare nonsynonymous variant in the C3 gene with risk for age-related macular degeneration (AMD). Full disclosure: I’m an author on one of them. These studies all came from different groups, working primarily with different case-control cohorts. What’s fascinating is how they all arrived at the same answer, at around the same time, but in very different ways. They also shared a starting point, of sorts: the relatively recent association of variants in complement pathway genes with risk for AMD.

The complement system, sometimes called the “complement cascade”, is a complex network of plasma (blood) proteins that cooperate to provide microbial defense and maintain healthy tissue. It’s part of the immune system, and complements the antibody- and cell-driven responses to infection by pathogens. Thus the name. There are three ways that the complement system becomes activated:

Activation of the complement system eventually culminates in the formation of the membrane attack complex (MAC). This is the tip of the spear of the complement system; it literally punches holes in target cells, causing them to swell and die. Such a potent response obviously might pose a hazard to the host as well, so there are numerous regulatory molecules that act as negative regulators of complement activation. Of particular interest are complement factor H (CFH) and factor I (CFI), which promote the cleavage of C3b to its inactive form.

Importance of the Complement System

The intricacy and importance of the complement system is evidenced by inherited complement deficiencies. Mutations in the terminal (cell-destructive) portion of the complement pathway knock out its effector function, and causes susceptibility to infections by gram-negative bacteria. In contrast, mutations affecting complement regulatory proteins have been linked to auto-immune conditions like systemic lupus erythematosus. More recently, genetic studies of AMD have suggested that variants in C3, CFH and CFI might influence susceptibility to this disease. It’s an intriguing proposition, in particular because one could imagine a late-onset phenotype resulting from dysregulation of the alternative complement pathway. That’s where the three studies published this week got started.

Helgason et al have performed low-pass whole-genome sequencing (10x) on 2,230 Icelanders, which enabled them to impute genotypes for 34.2 million variants in 1,143 cases and 51,435 controls. Of the 12 established AMD loci, the authors found genome-wide significance for six (APOE, ARMS2-HTRA1, C2-CFB, CFH, C3, and TIMP3). Using regression analysis, the authors identified the best association signal at each locus, finding that for 5/6 loci, it matched the most significant finding from a recent meta-analysis. The sixth locus, C3, had a common variant hit corresponding to known associated variants p.Arg102Gly and p.Pro314Leu. But there was also a rare missense variant (p.Lys155Glyn, rs14785925) that was significantly enriched in cases. It was independent of the known risk variant in CFH (p.Arg1210Cys). Follow-up genotyping confirmed Lys155Gln in 1,107 cases and 2,869 controls from the Icelandic cohort. Replication in two independent cohorts (1,525 cases, 1288 controls from the U.S. and 1,329 cases, 1,689 controls from Europe) upheld the hit; the combined dataset yielded an odds ratio of 3.65 with a p-value of 8.8e-16. Given the role of C3 in complement activation, and the observation that all three associated variants (the two common hits and this one) are in the C3b portion, the authors speculated that reduced binding between C3b and CFH might lead to increased C3 convertase activity.

Our group undertook an effort to systematically identify rare, large-effect variants by targeted sequencing of eight AMD risk loci identified by GWAS. We performed custom capture and Illumina sequencing of 57 genes in those loci in 3,124 individuals (2,335 cases, 789 controls) recruited at the University of Michigan and the University of Pennsylvania as part of the Age-Related Eye Disease Study (AREDS) sponsored by the National Eye Institute.  To increase power, we selected ancestry-matched controls from the NHLBI Exome Sequencing Project cohort, yielding a final discovery set of 2,268 cases and 2,268 controls. This analysis revealed two large-effect rare variants: the previously reported variant (p.Arg1210Cys) in CFH and the newly identified p.Lys155Gln variant in C3. Follow-up genotyping in 4,526 cases and 3,787 controls from the U.S. and Europe replicated this finding. Further, by genotyping 471 families with multiple AMD cases, we estimated that 75% of first-degree relatives of a p.Lys155Gln carriers who also had AMD would carry the variant, consistent with an odds ratio of ~3. 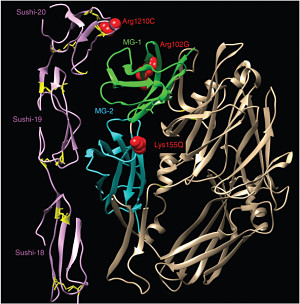 We investigated the possible functional consequences of p.Lys155Gln through in silico modeling of the protein crystallography data, which revealed that CFH variant p.Arg1210Cys, C3 variant p.Lys155Gln, and C3 variant p.Arg102Gly all map near the surface where CFH and C3b interact, suggesting that they might affect binding.

The authors of the third study sequenced the exons of 681 genes within all reported AMD loci and related pathways in 1,676 cases, 745 controls, and 36 siblings with discordant disease status. A burden test of rare (f < 0.01) protein-altering variants revealed that 7.8% of AMD cases are carriers of rare missense variants in CFI, compared to 2.3% of controls. Single-variant analysis uncovered 5 risk and 15 protective variants with evidence of association, of which four were within or near CFH (including p.Arg1210Cys). The 11 variants outside of CFH were genotyped in 2,227 cases and 2,888 controls from Boston, Baltimore and France. Two rare, replicated variants emerged: p.Pro167Ser in C9 and p.Lys155Gln in C3. Seddon and colleagues noted the location of the C3 variant close to the binding site for CFH, reasoned that the p.Lys155Gln substitution in C3 might confer resistance inactivation by CFI (which is aided by CFH). Indeed, fluid-phase cofactor assays demonstrated a significantly reduced cleavage of C3 with Gln compared to the wild-type (Lys) at residue 155.