Deprecated: Methods with the same name as their class will not be constructors in a future version of PHP; sl_disclosure_widget has a deprecated constructor in /home/dkoboldt/public_html/massgenomics/wp-content/plugins/skimlinks/widget.php on line 3
 Personal Genetics: Sending off for 23andMe Genotyping 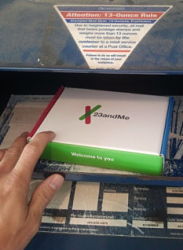 Is this a biohazard?

It has been my dream for several years to have my genome or exome sequenced. Working with NGS data every day tends to have that effect. The closest I came to that possibility was when some family members of mine underwent genetic testing for RP.

There was a remote chance, that if standard screening came up empty, there might be some exome sequencing. Maybe I’d get to be a control. Alas, the CLIA lab that did the test knows their business, found the [common] causal mutation, and that was that.

Of course, the powers that be here cautioned me that I wouldn’t get to analyze the data anyway, if family members became part of the research cohort.

Since getting my genome or exome done seems unlikely, I went with the next best thing: personal genetic testing service (affiliate link; see blog disclosure) available from 23andMe. For $99 plus shipping, I got this fancy-looking box in the mail. The celebrated 23andMe spit kit. The experience was somehow fascinating and a little gross at the same time. But I got it done, and sent my kit off to California.

Meanwhile, 23andMe began to tactfully bombard me with e-mails about what I’ll learn when the analysis is done. Before we get into that, let’s talk about the SNP chip itself.

Currently, 23andMe outsources their genotyping to the CLIA-certified facility at LabCorp. The array is Illumina’s OminExpress Plus, based on a core set of 700,000 HapMap-guided SNPs (OmniExpress) set that capture the majority of genetic variation in major continental populations. This is an advantageous starting point for a few reasons:

That last point is very important, because as more common variants are associated with phenotypes in GWA studies of thousands of samples, those findings can be incorporated into 23andMe’s database. However, I should take this moment to remind you that variants reported by GWAS are associated with phenotypes, not the cause of them. Most of the 700K SNPs, in fact, are located outside of exons, which permits them to rise to higher allele frequencies and become informative genetic markers.

Because the HapMap and other projects have genotyped millions of SNPs in dozens of human populations, it’s possible to quantify how much ancestry an individual shares with different continental groups. 23andMe calculates your “unique mix of ancestry from 22 populations”. Most of us have a pretty good idea what continent(s) our ancestors hailed from, but this provides both a measure of the contributions, as well as a breakdown of geographical/ethnic groups (sub-saharan Africa, northern or southern Europe, Ashkenazi, Native American) that may be interesting.

With a name like Koboldt, I’m expecting mostly German ancestry with some Irish and English, but I’d love to be surprised.

Although powerful, the OmniExpress core set contains few of the known mutations underlying rare inherited conditions, like cystic fibrosis (CF) and sickle cell disease (SCD). So 23andMe’s custom version (Plus) includes thousands of additional variants selected from the scientific literature, GWAS results, etc. These additions put the OmniExpress Plus at around 1 million variants, and are the basis of much of the genetic risk profile that 23andMe returns to customers. Of particular interest:

The 23andMe service is not new, and many of my colleagues have done it already. That includes two fellows who happen to be twins, and only realized they were identical twins after getting the test. Wish I could have been around for that “Ah ha!” moment (“You have that SNP? Me too!”).

I’ve always been interested, but I decided to pull the trigger now for two few reasons:

Disclosure: this article has affiliate links.