Deprecated: Methods with the same name as their class will not be constructors in a future version of PHP; sl_disclosure_widget has a deprecated constructor in /home/dkoboldt/public_html/massgenomics/wp-content/plugins/skimlinks/widget.php on line 3
 The genetic architecture of triple-negative breast cancer

Triple-negative breast cancer (TNBC), a tumor type defined by its lack of estrogen receptor, progesterone receptor, and Her2 (ERBB2) amplification, accounts for 16% of breast cancers. This clinically defined tumor type overlaps substantially but not completely with “basal-like” breast cancer, a classification based upon gene expression signature. This is a highly heterogeneous disease with a higher risk of recurrence in the absence of systemic therapy.

This month in Nature, researchers from BC Cancer Agency have characterized the landscape of genomic aberrations in 104 TNBC cases with a combination of whole-genome sequencing, exome sequencing, RNA-seq, and high-density SNP arrays. Using ultra-deep targeted resequencing, the authors validated ~2,500 somatic mutations and characterized their frequencies among heterogeneous clonal populations in each tumor. 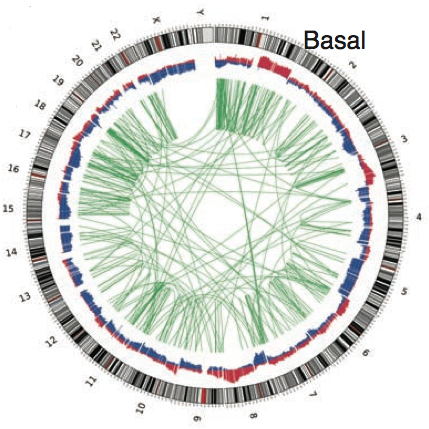 This is a complex study that’s hard to digest (the supplemental material had over 140 pages – come on, is that really necessary?) so I’ll do my best to break it down. I believe there are three highlights: frequent gene alterations in TNBC, under-representation of mutations in mRNA sequences, and a continuous distribution of mutation frequencies within tumors.

The most frequently mutated gene should be familiar to you: TP53, which harbored validated somatic mutations in 62% of basal and 43% of non-basal TNBCs. Other patterns of alteration were as follows:

Shah et al, Nature 2012 (Supp Fig 3)
These results are largely consistent with a separate study in the same issue that examined CNAs in 2,000 triple-negative breast cancers. I’ll have to cover that another time. Some of the known CNA patterns evident above include gains of chromosomes 1q, 3q, and 8q (where MYC is located). Note frequent deletions across many chromosome arms or entire chromosomes, many of which contain tumor suppressor genes (e.g. TP53 on chromosome 17).

This group at BC Cancer Agency is a leader in transcriptome sequencing (RNA-Seq), which is a key component of this study. Strikingly, the authors found that just 36% of validated somatic mutations discovered in genomic DNA were present in mRNA transcripts. This number is a little deceptive, and I’ll tell you why. Supplementary figure 2 offers a summary of the expression of validated mutations across all cases with RNA-seq data:

Mutation Expression Patterns (Shah et al, Nature 2012)
Notably, 23% of somatic mutations occur in genes with no observed transcripts: there’s no allelic effect of the mutation; the genes just aren’t expressed in any form. That leaves:
Bottom line, just over one-third of somatic mutations in the genome are present in the transcriptome. This has important implications for clinical cancer genome sequencing: just because a druggable mutation is present doesn’t mean it’s expressed.

With ultra-deep targeted sequencing, it’s possible to estimate the allele frequency of a somatic mutation with high accuracy, and from that, to infer the relative proportion of tumor cells harboring that mutation. A heterozygous founder mutation, for example, would be present in virtually all tumor cells and have a mutation frequency of 50% in diploid cells. Perhaps surprisingly, the authors find that somatic mutations occur at a continuous distribution in TNBC, and this appears independent of copy number alterations and tumor cellularity.

Part of this observation may technical in nature (i.e. false negatives in mutation discovery). However, this phenomenon has been noted in other epithelial cancers suggesting that the mutation content of cells within a single tumor may be differently shaped by biological processes and mutational mechanisms. It reinforces the notion that tumors (and TNBC in particular) are not a homogeneous mass of identical cells, but a collection of distinct sub-populations of cells evolving somewhat independently of one another. This is probably why they’re sometimes difficult to eliminate: you might destroy most of the subpopulations with therapy, but one or more minor clones could persist.